Home » Unlabelled » Writers Block, Surgery Decisions and more RADS issues
Where to start, I guess with the RADS issues.  On Thursday I went to BCCA for my usual RADS treatment only to have them tell me my mould has broken.  It was funny in a way because it seems if anything can go wrong with my RADS treatment it will, so the technician was very embarrassed and almost afraid to let me know what had happened.  I am not sure how it broke, and who was responsible, but I can tell you she felt awful about it.  Not only did it prevent a treatment from happening that day, it also meant additional hassle.

First, I had to go down to the CT area to get another mould made and another CT done.  It doesn't thrill me to get another CT, and I almost complained about it until I realized complaining would be futile.  I can imagine the Doctors discussing what to do.

Doc #1:  Patient X's mould is broken so we need to give her another CT to make a new one.
Doc #2:  More radiation, is there another way around this?  More radiation isn't good, it can cause cancer and all kinds of nasties (okay perhaps the doc didn't say nasties)
Doc #1:  I know, but what does it matter, she has cancer already and this cancer will kill her before she could possibly develop another one.
Doc #2:  Oh yes, of course, who really cares, let's blast away at her, it'll never come back to bite us.

So, I realized as this dialogue went on in my head, there was no point in pushing back on the CT.  It was going to be done regardless. 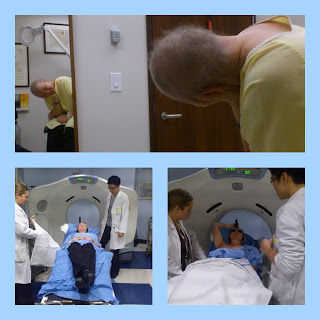 After the CT I was told that the planning wouldn't be done in time for my treatment the next day, so I'd have to come back on Monday to resume my radiation treatment.  Monday should have been day eight and counting down, but it's going to be day ten and counting down again.  Not only that, day ten, nine and eight will probably be long sessions once again because not only do they need to radiate me, they also need to re-do all the imaging because they are working with a new mould and new positioning.  Oh JOY!

An hour or so later, we were off to my second consultation with Dr. V, the breast reconstruction surgeon.  If you recall, I have been advised to not have TRAM flap reconstruction due to the extended recovery time, possibility of life long loss of strength in the abdominal area, risk or complications and so on.  All the research I had uncovered had suggested that if I was a candidate, the DIEP flap was the best procedure to have.  After my post regarding reconstruction surgery I had received many emails from women who had experienced TRAM, as well as women who had DIEP.  The long and the short of it was TRAM flap was HELL and most would never opt for it if given the choice again.

Dr. V and I went through my options, DIEP of course was the best option, however the wait time (possibly 8 months), would rule it out for me.  A LAT flap was also an option, a much easier recovery than the TRAM, but it would leave me with a scar on my back and my body asymmetrical afterwards.  Implants - not even discussed because of the condition of my skin after radiation and the fact that this is not a skin sparing mastectomy.  So we were back to square one, TRAM flap.  She re-examined me and noted that I had good, strong abdominals and was relatively fit.  She also assumed (ha ha), that I was the type of person who would follow her post-op instructions regardless of the pain, and would push through it, doing exactly as told, thereby improving my chances of a good recovery.  She also reiterated and made sure I understood that when she says 3-4 months recovery, she is serious, the first two months being extremely difficult, as well that even though I am in decent shape, that does not completely reduce my risk for complications such as hernia or abdominal bulge.  The other plus is that we can do this surgery immediately - early March.

I can't see I have much choice here, I need to get this done, and I need it right away, so I'm just going to Do it!  I am very scared, particularly about the pain during recovery.  I'm also scared I will get hooked on Oxy or something like that.  I've heard nightmare stories about people becoming Oxy addicts after major surgery or injury and this concerns me.  Seven weeks away and I'm worried already.  Argghhhh.

Oh yes, I was going to talk about writers block.  So, I have been writing this blog for eight months now and always seem to have something to say, I enjoy doing it and although most of the time I write in the wee hours of the morning, I find it easy.  So imagine my surprize when I started experiencing "writers block" over writing my book.  I'm not sure if it's writers block or if it is fear.  I have completed most of my book and have only a few chapters left to write, and those chapters are becoming a challenge.  Content wise, I'm good, I know what I need/want to put down on paper, it's just doing it that is proving difficult.  Part of the reason is that my entire days have been taken up with radiation treatments, then, when I get home I am exhausted and my brain just wants to rest.  The other reason is insecurity, I am worried that my writing isn't going to be good enough, that readers will get to chapter four and find it boring, so I constantly question myself and put off the task of writing.  Now it's starting to stress me out and piss me off.  I had wanted my book complete by the end of January, unless I work through the nights, that's not going to happen now.  That means the pressure is on to get it done in February, because after surgery I'll be out of commission for a long time.

Pressure, pressure, pressure.........this was meant to be a pleasant experience.  I understand now what hell writers must go through, mainly because of the pressure they put on themselves.  I'm going to have to institute some of my Michelle discipline to get through this.  Set aside a few hours every day and "Just Do It!"

So, I'm now going to switch over to the book...and I'll catch up with you folks later.

PS:  Isn't that a funny bald shot above?

Oh hon that's a rough journey. One....moment....at....a.....time. And i'd be torn too. If writing is worth it make the sacrifices (though don't sacrifice your health) "Youuuuu can dooooo it!" (that's said like rob schneider always says it in adam sandler movies...) Or just spend your time healing. Whatever feeds your soul most. I know you can handle the recovery - you are honest and strong and driven.

Does the recon have to be done right away for better results? How can they have a "a waitlist" for something so important? Does it require a different surgeon? Oh so many questions. You don't need to answer me.....

Love and peace to you tink!

This is indeed a fantastic resource. Thank you for making this publicly available.

Send me an "I AM A CANCER WARRIOR" Bracelet

NEW BLOG PAGE IS WWW.PAMMENTERYOUNG.COM (clear your cache to get there) You will know you are there if the page has a red banner on top.
In 2012 I was diagnosed with a life threatening cancer and also lost both my brother and my mother. I know intimately how precious and magical life is and it is now my mission to help others "get" this and fulfill their dreams in a safe & profitable way, before it is too late. I offer coaching, step by step guides, tips to improve productivity and books to help you LIVE YOUR DREAM LIFE.

The Year I Died